Where to look for business “loose change” 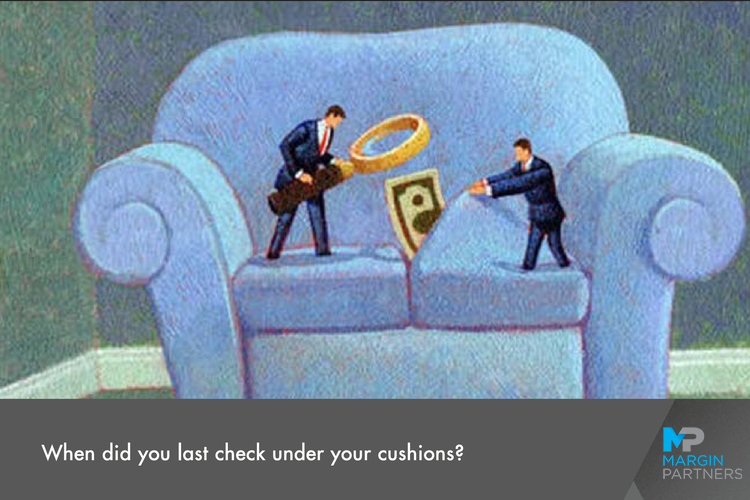 I found $20 on the footpath as I entered an Officeworks store last week. No big deal given I was about to spend double that on stationary, but a nice moment none the less.

Putting the money into my wallet, I wondered how long it had been lying there “unclaimed’. It’s a busy store and I’d guarantee that a number of people had just overlooked it as they walked past prior to my discovery.

It’s not the first time I’ve found money lying around. Routinely I’ve unearthed orphaned gold coins under the front seat of my car. In jacket pockets and my sports bag there is always a little hidden coin to be discovered. And, there was that $10m I happened upon within a Supply agreement a few years back.

Known as ‘loose change’ in our personal lives, I call it Margin Erosion in Business. Both are exciting to find but rectification of Margin Erosion not only puts money in the company wallet but can dramatically increase employee satisfaction as well.

Consider this. A Supplier is three years into a five term with a Customer. The original Supply Contract, nutted out by the Account Managers, is buried in a basement filing cabinet. Multiple functions and many people are involved in the day to day fulfilment of the agreement and “all seems good”.

Such examples of unintentional Margin Erosion occur below the surface, often under the guise of “good customer service” or simply as the means by which respective functions on Customer & Supplier side ‘get things done’. However, each comes with a cost that hits the P&L (directly or indirectly) and business struggles to explain such variances.

Equally concerning is the impact on functional staff trying to do the best job they can. Routinely operating in a contract void, they may have no idea of what the negotiated version of “good” looks like for their function. As result, they can be susceptible to ‘creep’ (excessive demands or lack of service) from counterparts and feel much less empowered than they should.

Collectively, I estimated there is a lazy 15% (monetary, productivity or employee related) of margin being unintentionally “sat on” everyday in the workplace, especially within B2B Supply agreements.

Does it matter? Some argue ‘loose change’ is the cost of Customer centricity. Others say it represents a lack of accountability.

My recommendation is to reach behind the ‘contract couch’ routinely. Take a look. You can then determine how much it matters & chances are you’ll find it far more rewarding than a $20 footpath